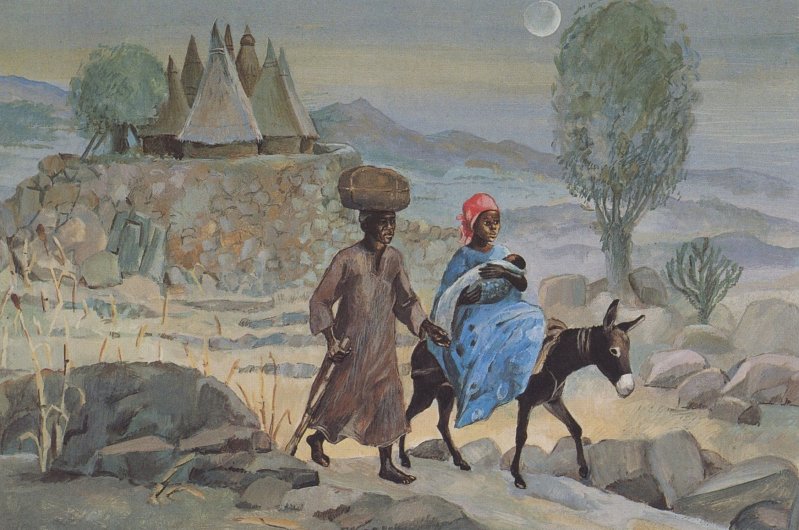 The Flight Into Egypt (Jesus Mafa)

In speaking about the current administration’s interpretation of immigration and border control policies to mean that it is legal and appropriate to separate children from their parents, a woman said to me, “I don’t believe this. This is not who we are.”

I understood what she was saying, but I wholeheartedly disagreed.   This is who America is.  We have been “this” for the entire history of my ancestor’s presence in this country.  American slave holders  separated black children from parents and sold those children off in front of their parent’s eyes for over two centuries.  That’s just an example of who American has been.  Pay attention to the lived experienced of other marginalized people in this country.  They have stories that affirm this is who America is and has been for centuries.

Just because “this” is who America has been does not mean that “this” is what America will always be.  We don’t have to be this way.  America can grow up.

While I appreciate the many right-wing, right leaning and other religious leaders who have condemned this interpretation of policy, for some of them – not all – their condemnations ring hollow.  Some of them hailed the election that brought this president into office.  They championed this  administration’s dismantling of protections and safety nets programs for poor Americans. They were and are silent about this president’s global shenanigans.

Yet all of these issues are fundamentally connected.  You can’t condemn hatred and violence in one place while you ignore it or condone it in another.  You can’t say that separating children from their parents at the borders is “anti-family” while you close your eyes to the harassment experienced by children who speak against American gun policies. You can’t nuance child-harming policies because the real Jesus – the one whose family fled the massacre of children and escaped to Egypt because shoring up King Herod’s insecurities became domestic policy; the one who restored a son’s life to a widow; the one who warned of the consequences of thwarting the lives of children — that Jesus said so.

In a harkening back to the theologies that served to undergird the American institution of slavery, Attorney General Sessions has been quoting Paul. Quite frankly, ain’t nobody asked Paul nothing.  I agree with Howard Thurman’s formerly enslaved grandmother who believed that Paul was not to be consulted on some matters of liberation.  Listen to Jesus.

I’m heartened by the statements from religious leaders. I really am.  It’s something. At least.  More than statements – that the likes of AG Sessions is not reading — what is needed is for religious leaders to gather up the shards of lives scattered about in the wake of the tanks that came before this border evil.  Put your bodies on the line. Educate your members.  (If this is your conviction, put your canons where your mouth is.)  Do something. Or – shut up with your version of useless “thoughts and prayers.”

And – Attorney General Sessions is a United Methodist.  Here’s a word from his bishops.

The history of America being America:

No Impossible Wisdom Is Asked of Us...