Want to know how you can create hell on earth? Decide that you don’t care whether children eat. And then, create more hell by shaping policies that determine what kids are worthy of school meals.
Schools and school systems across the United States regularly deny meals to children because the child/parent “owes money”. When my daughter was in elementary school I paid for her school lunch through the school’s online payment system. I set up a warning level so that I would get an alert emailed to me when the account reached a certain level. Whenever I got the low-balance alert, I would panic (yeah – I set myself up for this madness!) and rush to replenish the account. My fear was always that I would mess this thing up – miss the alert, some technological snafu or some other thing would happen and that would set off the “lunch lady” caricature I had in my head.
It never happened and my child was not denied a meal. But other people’s children are being denied school meals across the country. Every day. (Some of our schools are so overcrowded that kids don’t even get a lunch period. I’ve had two children affected by this – and they were dependent upon “understanding” teachers who would allow them to eat in class because they didn’t even have a lunch period. But that’s a discussion for another day.)
But on this — what is to be gained by refusing a child a meal?
What adult thinks it is good public policy to deny a child lunch – to humiliate and publicly shame them – because their parent or guardian has not “paid” their bill?
Who physically takes food away from a child and throws it away as the child watches?
What human being would agree to follow a policy that requires adults to throw away a meal rather give it to a child whose parent has an unpaid bill? (I mean, fight the power, people!!!)
I believe that the United States has the resources to offer free school meals to all public school students regardless of income – but we don’t have the will.  What we spend on the administration of the meals program and the effort to deny a seat at the table for the “unworthy of a meal” kids is probably a sin. I don’t know – but I surmise that’s where the waste is –  bureaucracy.
It’s never a waste of resources to FEED A CHILD!
But, why do kids need to eat anyway? And most importantly, why do poor kids need to eat? And what does all of this matter to me? I ate today.
It matters because, by our wrongheadedness and thoughtlessness, by our misunderstanding of what we owe our children, by our lumping children into categories of “worthy and unworthy” of our support and investment — we are in effect supporting policies that are creating hell on earth for our children and for ourselves.
What in the world do you think is going on in the hearts and minds and spirits of the children who watched adults throw away the food that they were denied? What about the children who got to eat and watched their peers denied a meal for something they had no control over? Do you honestly think no damage was done to any of these children, nothing to see here, move it along?
Do you have any idea of how that experience — and all of the other ridiculous and mean-spirited ways we publicly shame and call out children around their family’s income — communicates a message about what we value?
Here’s the link to the story about how nuts adults can be – read it and weep. And then decide to stop creating hell on earth for kids. 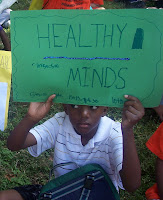 Sure, as much as we’d like to think we know — we don’t really know who these children are growing up around us.  We may have thought one would never amount to anything, and look at him now.  Another seemed to have an early golden touch, but somehow, lost his way.  We certainly can’t predict what will happen….well, some things we can predict.  We know that, by and large, if a child has to make his or her own way because we are absent, neglectful, abusive and self-absorbed — without the intervention of God Almighty…yeah…we have some idea of how that could turn out.

Whether we give this child everything or nothing, she is still in the hands of God.

So are we. The thing is — no matter how things turn out — God is watching us and we will be called into account for the “mean estate” so many children have to endure.  How unimaginative of us!  Poverty, the absence of loving adults, homelessness, hunger, low expectations, the refusal of power to invest in their potential….what mean, mean unimaginative estates.

We will be held accountable for the senseless spears that pierce their hopes and dreams…violent communities, unstructured homes, boundary-less and undisciplined lives, they way we sacrifice and crucify their childhoods on the altars of common gods.

Whatever child “this is” in your presence this season, haste to bring them a new and hopeful future.  Haste to be a real shepherd — go looking for “this child” to guard and keep watch over. Haste to be an Angel and sing a different tune on their behalf — sing justice and sing investment in their futures.

What child is this, who, laid to rest
On Mary’s lap is sleeping,
Whom angels greet with anthems sweet
While shepherds watch are keeping?

This, this is Christ the King,
Whom shepherds guard and angels sing;
Haste, haste to bring Him laud,
The baby, the son of Mary!

Why lies He in such mean estate
Where ox and ass are feeding?
Good Christian, fear: for sinners here
The silent Word is pleading.

Nails, spear shall pierce him through,
The Cross be borne for me, for you;
Hail, hail the Word Made Flesh,
The babe, the son of Mary!

So bring Him incense, gold, and myrrh;
Come, peasant, king, to own Him!
The King of Kings salvation brings;
Let loving hearts enthrone Him!

Raise, raise the song on high!
The virgin sings her lullaby.
Joy! joy! for Christ is born,
The babe, the son of Mary!